The quantum physics “Law of Entanglement,” means we are all linked together and we all affect one another.  What you do impacts me and what I do impacts you.  It’s a ripple effect in its most simple form.  What is the ripple effect or impact you have on others? This relationship, this co-existence says we are entangled.  While it might seem like bizarre science fiction, the practical application is: if your integrity is exhausted, you too will be affected by your own lack of integrity.

“What goes around, comes around.”  – Les Brown, Motivational Legend

“Do your business in such a way that if someone spoke badly of you no one would believe it.”  These are my words I speak to my network of instructors who train nationally in critical care courses. Let me explain…

A doctor called me recently and asked me if a certain instructor was part of my training center.  After checking credentials, I reported that he was not a part and then I asked why.  The physician told me a story of a dentist whom recently graduated from dental school and took a Pediatric Advanced  Life Support Course from one of my competitors.  The dentist had treated a four year old patient and did not recognize the signs of apnea (basically the child was not breathing).  The dentist was scared and didn’t call EMS hoping that the child would wake up fine.  The child never recovered and the event ended with brain damage to a four year old.  The Training Center, the Training Site and the Instructor were all being sued because of negligence.

EMR has been a Training Center teaching emergency cardiac care for nearly 40-years.  There are a few instructors who do not provide books to the students or show the video which demonstrates what critical patients look like, as well as the action steps for healthcare providers to take.  Some instructors think their opinion is more important than teaching this class the way it is intended.  When training sites and instructors do not follow the critical care guidelines, EMR as the Training Center must step in and reeducate the instructor.  Leadership training is always part of the rehabilitation of an instructor.

Your Integrity Will Be Challenged

Have you ever had an acquaintance call and ask for a favor?  Your first response would be to help them out.  But then, as the details are explained you find out that you are actually being asked to violate some rule, law or it just left you feeling pressured to do something you were not comfortable doing. This request could take on many different forms such as cheating, fabricating a story, falsifying a report or record, or not honoring your word. You either quickly give in or resist only to experience pressure.

Consider the possibility that it is ok to just say, “No this is an integrity issue for me.  I request that you not ask this of me again.”

It is interesting to ask a group of people, “Do you have integrity?”  Hands go up all over the room.  I have even got an “Amen,”  “You bet I do,” and “Of course!” This is the highly self-flattering view we hold of ourselves.  When I ask more directed questions about certain specific operations such as, not paying taxes or other more covert ways of doing business, hands drop and faces cast down toward the floor.  Not a peep is heard.  Communication or lack thereof proves integrity is an issue for most of us. Are there any people out there that really live a life of integrity?  Is it impossible?

Signs of a person of integrity include: (1) Bosses whom spot and speak about their staff’s’ accomplishments and tone down their own (2) People who apologize for issues or take credit for dropping the ball, (3) People who volunteer.

Integrity is a behavior based virtue that is cultivated over time. It must be practiced with time and attention. It must become a conversation you have with yourself.

Beliefs get in the way of our integrity too.  If we say, “I stand for love of others,” but then I am disgusted by someone with a different religion, race, sexual preference than I, where does that love I say I have, fit in the equation?  I cannot stand behind the work “Love” and “Hate” at the same moment.  You cannot light a fire and extinguish it at the same time.  The two cannot coexist.

Our beliefs, words and actions all work together to determine our core ─ integrity. 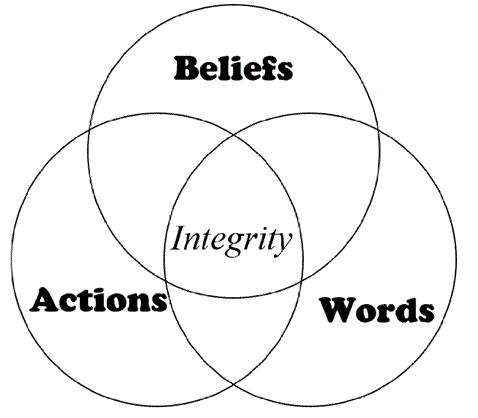 Does honoring your word mean anything to you? Consider that your word defines you.  It has to do with the very essence of your being. Our society functions off of integrity, and when people do not honor their word there is a breakdown in our society. Integrity affects every area of our life ─ it is simply who you be.

If your company has a code of ethics that says, “We hold ourselves to the highest standard of professional behavior,” but if you do not deliver on this promise by not telling a client about an issue that arises because your uncomfortable sharing, who are you being for yourself, your team at work, family and the client?

The Dallas Police and Fire Pension Fund was one of the fastest growing and stable pensions in America during the 1980’s and 1990’s.  Shortly after I retired in 2011, this pension fund was found to be collapsing due to integrity issues with past managers and investments firms.  I have found this story untrue.  The City of Dallas had recently gone to a strong mayor position.  This new mayor came in and engineered the pension crisis, vilified emergency services workers to the public.  Then he used our money to pay for a lawsuit.  The City of Dallas’ citizens are going without fully staffed police, fire and EMS services because the mayor needed the money elsewhere.  All the time he was draining the pension with the intention of starting a new pension with less benefits than had been promised by his predecessors.   The book “Retirement Heist” by Ellen E. Schultz outlines what happened in Dallas, Texas and its coming to a city near you if you don’t stand for integrity.

There is a trend in politics and business not to honor one’s word.  One of the core values of Enron was integrity.

As a new leader, consider that every choice you make impacts another person.  Can you stand behind your choices?  Could you get up in front of a group of people and defend those choices?  Leaders must live their lives as if on camera every waking moment.

There is one thing that will waste all our efforts in becoming good leaders and it’s the impact you have on those around you involving integrity.  Do not give your integrity up for short term gain.  Declare today that your own integrity will stand in the face of opposition.

People will believe what you do. We must be the purest example of integrity to our team, our family and for ourselves.  It’s not always easy but it is worth it.